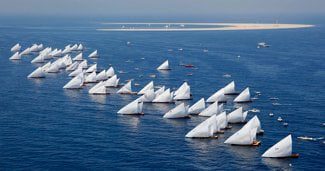 Pearly-white triangle sails will speed over the Arabian waves on Saturday, May 21 for the Al Gaffal Dhow race. The Al Gaffal is the last race of the season and one of the oldest traditional sporting events. Some have called it the “biggest traditional sailing race in the world.”

Paying Homage Approximately 100 dhow sailboats enter the annual competition honoring the centuries-old tradition of pearl diving. Long before oil was discovered, the pearl trade established Dubai as a major international marketplace. Archaeologists have found Emirate pearls dating back at least 7,000 years. Many families can trace their ancestry back to the pearl divers, dhow crew members and pearl merchants who developed Dubai’s reputation worldwide. The Al Gaffal race offers a venue for keeping the traditional sailing skills used in the pearl industry active and honed.

Pearl Boats The 60-foot dhows competing in the race sport polished wooden hulls and have no engines. Crews of at least 12 people work the sails to coax the breezes into pushing them over the finish line, which can be a challenge on a calm day. The race begins on the small island of Sur Bu Na’air, 50 nautical miles west of Dubai, then heads east for 23 miles to a checkpoint at Moon Island before heading to the finish line at the Burj Al Arab Hotel. This route is similar to that used for centuries by pearl boats returning from diving trips. The race’s name, Al Gaffal, means “the return.” 26th Annual Competition The first Al Gaffal Dhow race was held in 1991 with 53 vessels competing. Since then the competition has grown into a major sporting event with an average of 100 entries each year. In 2013, the event became an international competition when a German team was allowed to enter. Since then a French crew has also joined the competition, which was previously restricted to citizens of the Emirates. His Royal Highness Sheikh Hamdan Bin Rashid Al Maktoum, Finance Minister of the United Arab Emirates and Deputy Ruler of Dubai is the principal financier of the event and follows the race closely.

Watching the Winners The race begins in the early morning hours and typically takes about eight hours to complete the course, depending on weather conditions that day. While many watch the finish from onshore and some choose to buy tickets for the Dubai ferry, there is another option. Chartering a yacht gives you a unique perspective on the Al Gaffal race. From the start as the dhow’s leave Dubai through their thrilling finish at the Burj Al Arab Hotel, you’ll feel the same waves and winds as the competitors. However, unlike the race contestants, you will have a modern vessel that’s easily maneuverable and not at the mercy of the breezes. Whether you want to watch the race, or just enjoy a relaxing day on the water, Cozmo Yachts has the perfect vessel for you. For more information, please contact us today.