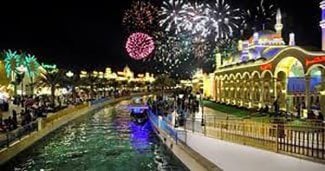 I am one of the guys who had been to Dubai for few days and found that place more than what I used to hear about it. Many of my friends settled over there with families kept on inviting me and finally, I got a chance to visit that wonderful city to conduct a training session since it’s also the technology hub for the gulf region. Giants of information technology are based in Dubai megacity from where they provide their product & services support to the complete Arab world. Since it was my first visit to a non-native place so obviously had many questions in mind although most of them remain pre-answered by my friends but the satisfaction was attained after witnessing all that from own eyes. In the following headers, I have tried to the cast an overview that may contain answers to all the major queries of the fresh visitors.

Language is not an issue If you are the fellow who gets confused about the language issue whenever you need to travel to a place of Arabic origin then bear it in mind that in Dubai, language is not an issue at all. Although it may not be the official language of the emirates but in fact, it’s the widely spoken across the metropolis. Dubai city reflects the globalization in its true form as people from across different regions, nations, cultures, and faith arrive there for the exchange of values. For the culture geeks, Sheikh Mohammed Center for Cultural Understanding is also there where they could learn more about the local culture there.

Unlimited employment & entertainment options Dubai is the place to be visited at least once in a lifetime. It would not be wrong to call it the city of engineering and architectural wonders. One of my friends who spent almost a decade working there used to say that it is quite difficult to explain about the energy and artifacts of Dubai. Just take the options of entertainment over there, one can experience the all worldly exclusivities in a single day only in Dubai and nowhere else in the world. Begin your day with a tea at horse race track followed by a brunch down the world’s largest building in the world. Then put up your snow gear to play up with penguins and finally conclude your day with bar-BQ dinner after riding camels and enjoying the desert safari at some sand dunes or charter a yacht in Dubai for the evening to watch a beautiful sunset of the city.

Dubai is a great as its safe When I planned to visit Dubai for the first time, I was pretty much confused. In south Asian countries like Bangladesh, India, Pakistan, Sri Lanka, it’s a common notion that middle eastern nationals are impolite and unkind but truly saying that it was all opposite, I found the Arab Emirati people are quite welcoming, friendly and cooperative and its obvious from the population of the Dubai as well since more than 88.52% of citizens are the people from other countries around the world and only 11.48% are the natives. The crime rate in Dubai is considerably lower than in most cities throughout the world of similar size. Crimes like robbery are almost equal to zero, even the gold shops remain fully secure and shoppers concentrate fully on their shopping.

Acquiring citizenship is not an option A greater number of expatriates who have spent almost decades working over there, they are fully adjusted to its environment, weather, and customs, or in other words, they are the happy immigrants practically but they get disappointed over the information that they would have to leave Dubai at last. They cannot become the permanent citizens that is to obtain immigration of the UAE. To stay in Dubai, they have to be employed or the second option is deportation. In fact, people who get fired from a job are granted some temporary stay period so that they could hire by another employer.